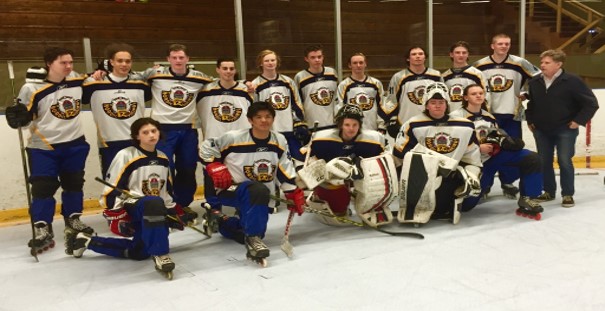 Nordic Vikings youth started their Inline Campaign just three weeks ago but has in this short notice done an amazing trip and progress in Inline. Already first weekend they manage to beat the best Swedish Team ever in Junior Inline, the famous Lycka(Leksand) who had not lost a game in three years and they ended second in the Swedish Junior League.

In the Swedish Championship the Team did some strong games and reached the Final, after victories over IP Plös(Oskarhamn) in the quarterfinal with 6-4 and Örebro in in the Semifinal with 8-4. In the semifinal the Vikings might did their best game in this three weeks and with goalie Chirs Lundin in great form the Team was ready for Final and their first medals already on the Saturday. The Final on the Sunday was another story and Vikinga actually got a real lesson from Lycka, who should be congratulated to the new Swedish Championship

Currently 4 players are evaluated to the Swedish National Team for the World Championship in Roanna in June
Carl Wassenius, Wille Nielsen, Lucas Nordsäter, Kevin Lindberg. Also Robert Holmström, Hannes Axell and Chris Lundin is evaluated but are on the waiting list.

On the Rooster who took the first Swedish Championship Medal.