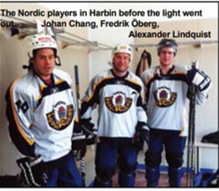 Nordic Vikings has been on a Investigation tour in China

Nordic Vikings has been on a Investigation tour in China, during March, where a Senior Group Invested the Senior Hockey skills in Harbin and Chancgchun and a Youth Team invested next Generation in Beijing.
The Senior group, was led by former Asia League Legend, Taro Nihei. The Investigation started with some sections with Chinese National Team in Harbin, and went through Changchun to Beijing for a sucessful final Legends game in Beijing. The group consisted of three Nordic Players Fredrik Öberg, Björklöven, a potential player for China Dragons with a huge experience from Swedish Premiership and Swedish National Team and Johan Chang, with a Chinese Grandfather, both a potential China Dragons and Chinese National Team Player. The third player was Alexander Lindquist, a potential University Player in a Chinese Domestic League.
The Youth Tour became really successful with three informal victories over diffrent age groups and skills from Hokay Club. In the first two games Vikings dominated the games and won with 15-0 and 5-1. In the last game Hokay put up at team with the best Youth Players in Beijing, born up to 96. The game started with a huge dominance and attack from the Chinese side but the Swedish goalie held the team in the game and the first period ended just 0-1. In the second the Chinese Players became a little bit lazy, and suddenly the game result was changed to 4-1 to Vikings after some goals from the book of ice hockey. When the Chinese stopped play as a team and started to go on their own they became clearly defeated by a much younger and smaller team with the final score of 7-3. The final words from one of the Chinese Parents ” We had the five best kids on the ice but could not win the game” tell you a little bit of the story… and gave the Chinese a lesson…
A Fantastic performance from Goalie, Olover Söderström, born 98, Defensmen Lucas Nordsäter, born 98, Oskar Söderström, born 99, Robert Holmström, born 99, Forwards Martin Bräck, born 99, Linus Karlsson, born 99, Måns Alm, born 99, Robin Myrlund, born 99, Viktor Björklund, born 00, Tobias Nilsson, born 00 and Linus Karlsson, born 99