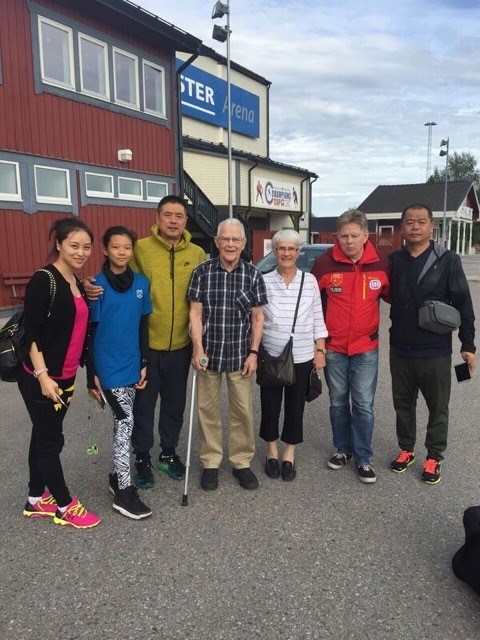 When Chinese Bandy Group – visited Edsbyn, they practiced with the Swedish Champions and Yu Duchen sang the classic “Welcome to China” for the Edsbyn players.

After worlds they met Elis Johansson – the Bandy Legend in Edsbyn and father to Hans Elis Johansson Chinese National Team Coach and as his brother Ola Johansson both involved in the Edsbyn Team. The Johansson family is a little bit special and Elis played and won some Swedish Bandy Finals already in the late 40ties to some years into the 60ties, among them the last final on a lake – Perstorpsgölen – as the 2018 WC for Woman in Chengde should be played. However Ola Johansson is the man in this family with 15 Swedish Championship as a player and coach. Hans Elis is the youngest and has also over 10 Championships, but he also played one season in Russia and became Champion also there. He also worked several years for Swedish Television before entering China Bandy Project. Hans is in a way the Pioneer in the family – Both Hans Elis and Ola has been voted Best Bandy Player in the World.